Home / computers / Uncategorized / I am terrible I know, but it’s a post :)

So, you know I have been going back and forth on getting an Apple TV (ATV):

Why have I not just broken down and got an Apple TV?

Well, (insert dramatic drum roll or something fitting) because, as of last night I don’t really need to. The only thing I want the Apple TV for is to stream the TB’s of movies I have. With an Apple TV, I would have to add them to iTunes, let iTunes do it’s thing, then wait for them to stream to the ATV. Where as using Vuze Bittorrent Client for Mac, I can just add them to my XBox 360. Which I don’t really use to even 20% of it’s potential. It converts them to a playable format and copies the videos to my XBox. It’s pretty dirty simple too. Drag and drop from the Finder to Vuze. Done and done. 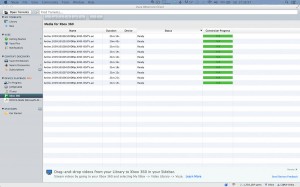 As you can see, easy.

Well, now to rebuild the blog as I was trying to update WP, and it locked me out of uploading pictures. The fix: In Dashboard> Settings> Media, change the large photo to what ever is bigger than image, and fixed. I was getting really angry trying to upload the above picture.

Well, off to a party.